Transfers from Sofia to Rupite and returns from Rupite to Sofia. Rupite is a village which includes a small mountainous protected area in the southeastern part of Blagoevgrad Province, Bulgaria, 10-12 kilometres northeast of Petrich, inside Petrich Municipality, on the right bank of the Struma River. It is best known as the place where the Bulgarian medium Baba Vanga lived and was buried. The area is in fact the crater of an extinct volcano, its appearance being shaped by the volcanic hill of Kozhuh, the thermal springs and Pchelina Hill. The village has 1,124 inhabitants. Rupite is a protected area, which is situated at a distance of about 10 km from Petrich and 2 km from the village of Rupite, at the eastern foot of the extinct volcano Kozhuh Mountain (281 meters altitude). The hill was built by volcanic rocks. Its name comes from the fact that it looks like a mantle (kozhuh in Bulgarian). In 1962 a part of the locality of Kozhuh – 0.4 hectares – was declared a natural landmark. The protected area of Rupite is famous for its healing mineral springs with a temperature of 74° C and capacity of up to 35 l/sec. The climate in the locality is transitional-Mediterranean, which is a reason for the presence of Mediterranean grass vegetation and some thermoliphic animal species. The natural by-river forest consists mainly of White Poplar (Populus Alba). The protected areas of Rupite and Kozhuh Mountain are homes to various snake species. Here you can see the relatively rare species – Cat Snake (Telescopus fallax). There are 201 bird species in the Rupite area, including various Mediterranean species, which can rarely be seen in other places in our country. Via Aristotelis passes through this area. This is one of the two basic bird migration routes through the territory of the country. In the region visitors can see species, such as the Large Olive Warbler (Нippolais Olivetorum), White-headed Shrike (Lanius nubicus) and Black-headed Shrike (Lanius minor).

The transfer from Sofia to Rupite or from Rupite to Sofia includes car rental with driver, fuel and tolls. The price for the car is fixed and is for the whole car (up to 4 passengers). You can order transfer by reservation form. We will contact you for details and confirmation. 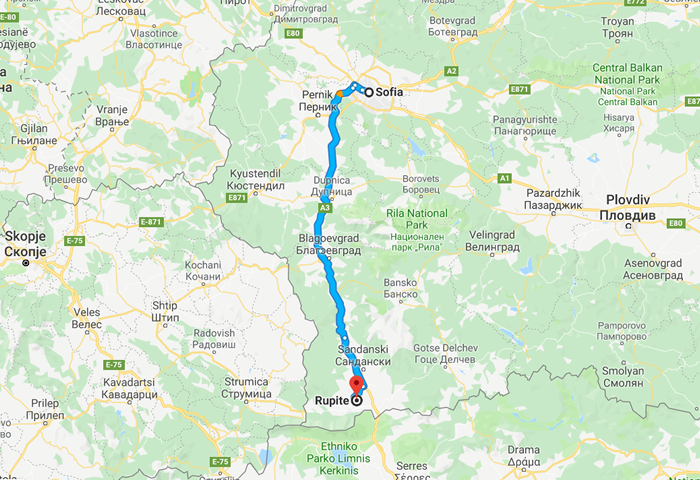 In the midst of a wrecked volcano and remnants of ancient times, known as the place where Prophet Vanga lived, the village of Rupite is attractive to anyone who wants to touching the visible and the unseen, to the explanable and inexplicable, to reality and mysticism, to the perfection of nature and the small perfections left by people who, despite their transience, have been preserved, despite the whims of time. The village of Rupite is located Southwestern Bulgaria. It stands 8 km away from the town of Petrich and 17 km from the town of Sandanski. Located in the Petrich-Sandanski valley. 2 km away finds the extinct Kojuh volcano. At its eastern foothills is Rupite, famous for its prophecy Vanga and its curative mineral springs. It rises here the temple "St. Petka Bulgarska", built on the idea of ​​Vanga. This is a place of worship for thousands of needy. The temple itself is made as a gallery, it can be see the unconventional icons painted by the artist Svetlin Russev. In the courtyard is Vanga's grave. And its modest home is not far away. The best time for to come and plunge into the energetic and festive atmosphere of the place is August 15 - Assumption. Another exciting place is the ancient city of Heraclea Sintica, mentioned by quite ancient authors such as Titus Livius, Diodor, Strabo, Pliny Old and Claudius Ptolemy Its remains are located in the village of Rupite, on the southern slope of Kozhuh. For more than 100 years, scientists have been wondering where the city is. They thought it was was on the territory of today's Greece. It is only after the Latin inscription in 2002 that the place of Heraclea Sintica is right here. In the town of Petrich, which stands for 8 km, you can visit the Historical Museum, the Belasitsa Nature Park and the Monument to the Perished for the Country. 12 km away from Rupite and 18 minutes by car is the Samuilova Krepost National Park-Museum. It was erected under the reign of King Samuel and is part of the Key Defense a system whose purpose was to stop the raids of the Byzantines from the south. At 16 km and 19 minutes by car is the "Popina Laka" area of ​​the Coniferous Trees. Here spills its water The Popinolas Waterfall. It is located at 1230 meters above sea level and is situated along the river Basletsa. 17 km about 18 minutes by car finds the town of Sandanski. You can walk to the unique park "St. Vrach", which is one of the biggest parks in Bulgaria. It stretches on both banks of the river Sandanski Bistritsa. Visit the monastery of St. Kozma and Damian, whether one of the names of the city, as well as the Archaeological Museum, built on the remains of early the Christian Basilica of Bishop John. The museum is an active factor in the study of the basilica, the early Christian necropolis, of the complex "High School", thermal and residential buildings in the area. It has a rich archive and a collection of tombstones, coins, inscriptions, antiques, household items, but the most impressive is the discovery in recent years of the "Episcopal Complex", combining basilica, baptistery and colonial atrium. Take pictures at the monument the legendary Spartak, leader of the Gladiators' uprising against Rome from 73 BC. and get closer to nature through the Pirin National Park and the Melnik Pyramids, which stand 21 km away from Rupite. Explore the quaint rock formations and relax in the town of Melnik - a town museum, a monument of the medieval and the Renaissance culture. Enjoy the beautiful scenery, the old houses and the fine wine. And if you want to see the largest medieval monastery in Pirin Macedonia, it is The Rozhen Monastery is 22.6 km away from the village of Rupite, which is about 28 minutes by car. In Rupite, everyone discovers what they are looking for either faith in healing, rest in spa hotels, saturation of the senses with history and the eternity of nature, served with mysticism and enveloped with energy that you do not see but perceive.