Transfers from Sofia to Primorsko and returns from Primorsko to Sofia. Primorsko is a town and seaside resort in southeastern Bulgaria, part of Burgas Province. A well-known resort on the Bulgarian Black Sea Coast, it is located on a gore 52 km south of Burgas and has a beach strip of about 1 km². The average temperature is 29 °C in July, often reaching 30-33 °C and making Primorsko a favourable place for tourism. Sea temperature in July and August is 27-28 °C. Primorsko enjoys more than 2300 sunshine hours a year, mostly in summertime. The rivers Ropotamo and Dyavolska reka run close to the town. The Ropotamo nature reserve and Snake Island reserve are also nearby.

The transfer from Sofia to Primorsko or from Primorsko to Sofia includes car rental with driver, fuel and tolls. The price for the car is fixed and is for the whole car (up to 4 passengers). You can order transfer by reservation form. We will contact you for details and confirmation. 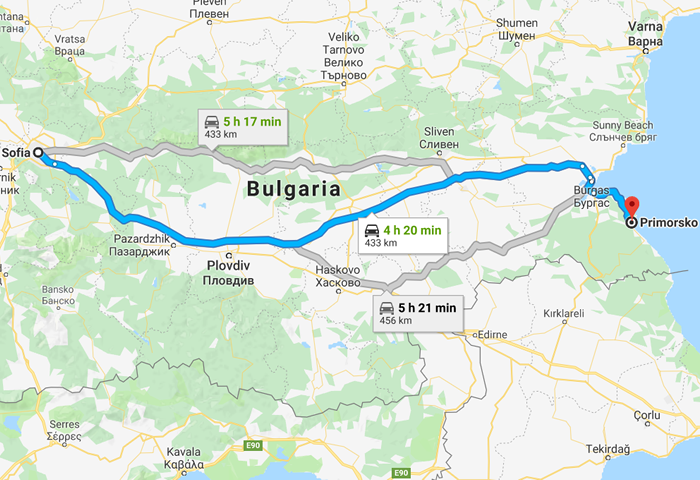 Primorsko is the place with the longest and largest beaches along the Bulgarian Black Sea coast. The town is located on a peninsula, between the Stamopolu lagoon and the Devil's Bay, at the foot of the Strandzha peaks. It stands 52 km from the city of Bourgas 26 km from Sozopol and about 6 km from Kiten. To the west of the town is the "Uzunza" hill, which ends the third branch of the Strandja Mountain. Primorsko is a small village, but there is a wide variety of hotels, villas, guest houses offering good and quality service. It has tidy cafes, nice restaurants, tempting pastry shops, discos, summer theater, sports grounds and the captivating aquatic attraction "Aqua Planet", on the territory of which there is a children's bar, sushi bar, ice cream bar, fast food and pizza bar, restaurant and many slides - "Octopus", "Elephant", "Cobra", "Tsunami", a children's slide, as well as a sports hall and open tennis hall. But the biggest attraction of the town is its beaches - "Arkutino", "Ropotamo mouth", "Perla", "Stamopolu", "Primorsko-sever", "Primorsko-juh" "Devil's Bay", "Alepu", "Devil's mouth - central" and "International Youth Center" beach, which are filled with golden sand and myths from the flattering sea water. For those who like campsites, the surroundings of Primorsko offer several such - camping Atliman, located 3.5 km, it is surrounded by forest, its water is clean, the sand is golden, it has parking, sanitary facilities, bar, restaurant, reception; camping "The cool place" - 6 km away, there are stationary caravans - bungalows, toilet, bathroom, internet and tents. 6.5 km is the camping "South". It is a quiet, peaceful place with parking, children's playground with swings, sandpit, a slide, a restaurant, a café and a beach bar. The area is the reserve "Ropotamo" known for its dense forests, sand dunes and marsh flowers. In his composition are the smaller reserves "Arkutino", which a marsh lagoon, "Snake Island" with typical cactus and snakes, "Sea wormwood" - named after the herb wormwood, which thrives on its territory and the reserve "Water Lilies" which is a kind of lily garden. In the upper stream, the river is freshwater, but when approaching the sea it becomes salty. Ropotamo offers a boat trip. The place from which you can get on the open motor boats is located near the main Burgas-Primorsko road. They themselves move 1.5 km upstream getting to the Vlyov Vir marsh, and the duration of the walk is 30 minutes return and return. At the mouth of Ropotamo are also found remnants of prehistoric Lake Thracian settlement. They are located on the right bank of the river, west of Kitka Peak. 5.5 km away from Primorsko is located "Maslen Cape", which is surrounded by beaches. Here are the remains of the ancient town of Ranuli, as well as the "Bekliko Tash" Thracian sanctuary Observatory, the Bulgarian Stonehenge. At the same distance is the rock phenomenon "Lions Head", part of Strandja Nature Park. It is stone Pyramid aged 60-70 million years. One of the most interesting sites in the area of ​​Primorsko is the underwater chapel "St. Nicholas the Wonderworker", which is the only one not only in Bulgaria but also in the Balkans. It is located south of the locality of Buruna, 5 km from Primorsko. It can be reached by boat, which can be reached by the quay at town. The chapel was created for 9 hours and consists of 4 plates. Interesting is the Urdoviza fortress, located within 7 minutes by car. It's close to Kiten. They are in it discovered remains of Thracian and Roman times. If you love the classic Russian literature, the museum of the Tolstoy's Colony in the village of Yasna Polyana is your place. It is housed in two of the halls of the local school. This colony was created in the early 20th century by followers of the great Russian artist. The exhibition has more than 250 objects donated by local and foreign donors, one of them is the grandson of Lev Nikolaevich Tolstoy. And in the chitalishte of the village is the largest collection of works by Tolstoy in Bulgaria. Most valuable there is a finger from the Russian village Yasna Polyana, which was brought here by the great-grandson of the writer. In St. Paraskeva Bay is the medieval church "The World Paraskeva. "A temple operated from the 10th to the 17th century when it was burned by the Turks. Primorsko is a typical summer holiday, combining many sunny days, intimate dinners, tasty and well-served food and a magnificent sea.