Transfers from Sofia Airport to Bansko and returns from Bansko to Sofia Airport. Bansko is a town at the foot of the Pirin Mountains, which are part of Pirin National Park, in southwest Bulgaria. It’s a gateway to numerous ski and snowboard slopes on Todorka Peak, including the challenging Tomba run. Footpaths cross the park’s craggy alpine landscape, home to bears and wolves. The park is also known for the high-altitude Vihren Peak, with forested ridges and striking glacial lakes. Bansko ski resort is attractive in all seasons. It provides excellent ski and snowboard facilities, as well as a unique history and architecture of an old and new part of the town. Thanks to these features Bansko is a favorite ski and snowboard destination. During the recent years a multimillion Euros investment in a brand new skiing area has been made by Yulen, the company that runs the skiing area of Bansko. Numerous new luxury hotels and facilities in the area of the Gondola lift station have been constructed.

The transfer from Sofia Airport to Bansko or from Bansko to Sofia Airport includes car rental with driver, fuel and tolls. The price for the car is fixed and is for the whole car (up to 4 passengers). You can order transfer by reservation form. We will contact you for details and confirmation. 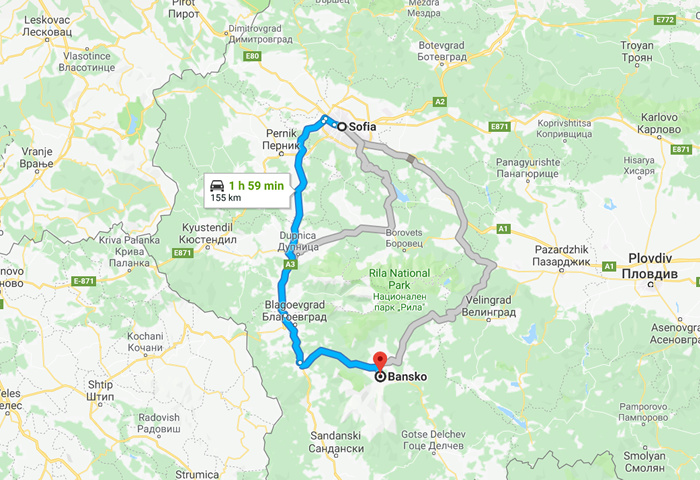 Bansko is a town where the new and the old coexist together. The first houses built in the nineteenth century have tall stone walls protected by fighters. The Hadzhirushkowska, Hadzhivulchova and Velyanova houses are richly decorated with carvings and frescoes. The Church of St. The Trinity was built in 1885, is a true architectural masterpiece for its time. The tourist attraction is also the museums in Bansko - Velyanova House - Bansko, Radon's Historical and Ethnographic Museum, The Constant Icon Exhibition - Bansko, House Vaptsarov House Museum - Bansko, Neofit Rilski House Museum, Historical and historical center of St. Paisii Hilendarski.
Bansko is an attractive destination in all seasons and has modern hotels, holiday homes and guest houses. During the summer months Bansko is the starting point for many tourist routes and eco-trails.
In recent years Bansko has become our most popular winter ski resort. In its territory there are built ski runs with a total length of over 70 km, starting at a level of 2550 meters and descending to 1000 meters above sea level. Ski center in Bansko has more than 25 km. ski lifts: one cabin lift, 6 four-seater, 1 tri-seat, 15 lifts and 1 half-pipe. The slopes are wide and are equipped with artificial snow guns.
Every year in August a traditional summer jazz festival is organized in Bansko with the participation of performers from the country and abroad. For a week, tourists and fans enjoy the virtuoso performances.