Transfers from Sofia to Melnik and returns from Melnik to Sofia. Melnik is a town in Blagoevgrad Province, southwestern Bulgaria, in the southwestern Pirin Mountains, about 440 m above sea level. The town is an architectural reserve and 96 of its buildings are cultural monuments. With a population of 385, it is the smallest town in Bulgaria, retaining its city status today for historical reasons. It is situated on the foothills of the Pirin mountain range and is overlooked by the Melnik Earth Pyramids.

The transfer from Sofia to Melnik or from Melnik to Sofia includes car rental with driver, fuel and tolls. The price for the car is fixed and is for the whole car (up to 4 passengers). You can order transfer by reservation form. We will contact you for details and confirmation. 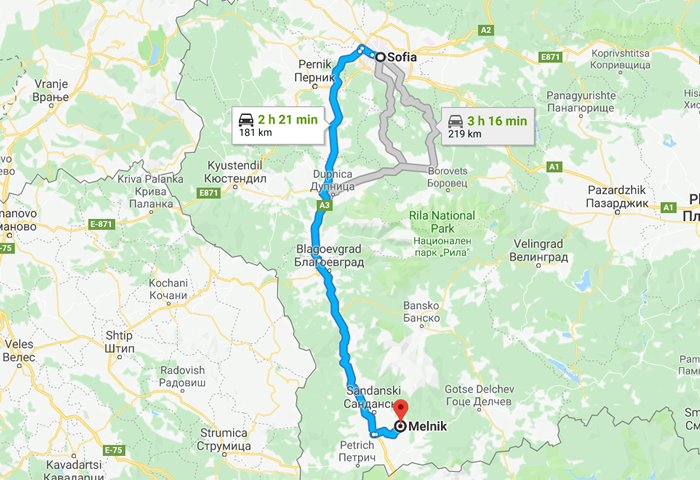 A place lighted by the whiteness of the rocks and captured by the aroma of wine. A place touched by the gods, and it is divine itself. A place where the bells of 70 churches and those of four monasteries. A place where they scratched the feathers of four schools - one girls and three males, and the books in the the library. A place that the Slavs called Mel (white clay, chalk) because of the surrounding white rocks and within the borders of the First Bulgarian Kingdom with the signing of the Bulgarian-Byzantine Treaty of 864. A place museum, part of the UNESCO cultural heritage and one of the 100 National Tourist Sites of Bulgarian Tourist Union. Come to Melnik - the smallest town in Bulgaria. Lying in the southwestern part of the Pirin mountain, at 437 m above sea level, it is located 22 km from Sandanski and about 82 km from Blagoevgrad. The climate is transition-Mediterranean with summer minimum and ground maximum rainfall. One of the tributaries of the Struma River - the Melnik River flows through the town. When we mention to someone the name of the city, everyone will associate it with the gift of the gods - the wine. As now, as in the past, Melnik has been known for its wine production and proof is the home of the most important merchants during the Renaissance, Kordopoulos, whose house and wine cellar were turned into a museum. In another Renaissance building, known as the Pashov House, is located the Historical Museum. It contains items of household, culture and main occupation Bulgarians in Pirin Macedonia. The heroic past whispers - the fully preserved Konak, the monument of Yane Sandanski, the Melnik fortress on the hill of St. Nicholas, built under the rule of Alexius Slav, a visual connection with the Petrich fortress, the remains of the Bolyarska house and the former clock tower, the antique church of St. Barbara, the church of Saint Anthony, mythical and the second one with this name in Europe, the ruins of the monastery "Holy Virgin Spileotisa", which is reached 300 steps away and offers one of the best views of the area, the St. Paraskeva Temple - Petka, from which you can go to the monastery of Stoyna Reverena - St. George, in the village of Zlatolist, only 50 minutes are needed to be there. Before you try the gods' gift in one of the Melnik taverns and enjoy the whiteness of the surrounding rocks, for which the Slavs have called this corner of the gods Melnik, do not miss to go to Rozhen Monastery, known for its stained glass and wood carving. It stands only 7 km from the city. From it on a direct trail, the phenomenon Melnik pyramids is reached. The monastery is medieval and is the largest in Pirin Macedonia, Bulgaria. 200 m from the monastery is the church St. Cyril and Methodius. Next to it is the grave of Yane Sandanski. The Melnik pyramids are located in the southwestern part of Pirin. There are many rocks in the area the most popular among them are the pyramids near the village of Karlanovo, so there is a rest station and other buildings for accommodation of tourists. Their height is 100 m and their slopes are sandy. In some places, they are totally vertical. Interestingly, they are under construction, so their appearance and shape are change. Melnik is the starting point for Chalet Pirin, one of the lowest situated here. It is on three floors, electrified and water-supplied. From it you can get to Kamenitza peak and to the other peaks of the main ridge between Jano and Boykov peak. The nearest huts are Malina, Teutovo Lake, Begovitsa, Bezbog, Demianitsa and Popovi Livadi. Enchant your senses with views, sit and relax with a cup of mavrud, feeling the uniqueness of this village with every ingested sip.