Transfers from Sofia to Hisarya and returns from Hisarya to Sofia. Hisarya, Hissar or Hissarya, is a small resort town in Bulgaria, in Plovdiv Province. It is notable for the impressive remains of the ancient Roman city of Diocletianopolis, the enormous walls of which still stand close to their original height for the majority of their circuit. The ancient city lies largely unencumbered by the adjacent modern town, in green parkland full of birdsong. In the centre of the park are still over two dozen hot mineral springs. Hisar means fort or castle in Turkish.

The transfer from Sofia to Hisarya or from Hisarya to Sofia includes car rental with driver, fuel and tolls. The price for the car is fixed and is for the whole car (up to 4 passengers). You can order transfer by reservation form. We will contact you for details and confirmation. 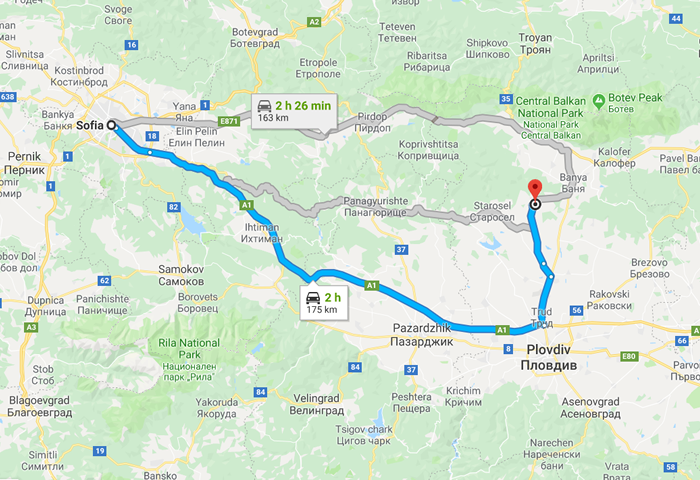 The streams of water surround it as a veil, and its outlines in the middle of the spring of "Momina Slava" are emblematic for the city, whose name is supposed to come from from "Caesarea" - "royal town". Bearing the mystery of the Thracians and named after Emperor Diocletian, today's town of Hisarya is located in the central part of Bulgaria, under the southern slopes of Sredna Gora, 44 km north of Plovdiv and 24 km south of Karlovo. The climate is transient continental with warm and mild winters, hot summer and relatively early spring. Hisarya is a place with an ancient and rich history that once enters the borders of the Odrysian kingdom, dating back to the great cult facilities near Starosel. In 46 years the settlement was conquered by the Romans, and in 293 AD. Emperor Diocletian gave him the status of a city and began to strengthen it. From that time on are the Roman family tomb, the Diocletian's baths, the Western Gate, the South Gate "The Camels" and the fortress wall. But the most characteristic of the city are its mineral springs. They are 22 with proven healing properties, different in physico-chemical composition and temperature. The mineral complex is included the springs - "Momina Tresa", whose temperature is 42 degrees and its water is poor mineralization but contains many microelements, the "Stubla" tap, which is hottest, "Toplitsa", the hottest spring of 51 degrees Celsius, and the sources "Bistritsa" and "Freshness". Visit the archaeological museum, where you can see preserved samples of prehistoric times, Thracian, Roman and Byzantine vessels, columns, marble plates, gold, silver and bronze coins. There is also a museum collection of kidney stones with about 10,000 items expelled during treatment. The Chitalishte, whose patron is Ivan Vazov, dates back to 1904, and the poet gave his consent in person, to bear his name. Patriarch of Bulgarian Literature donates a collection of books and books from other authors. A metal stamp with his image was also preserved. The city has Summer Theater, entirely in the spirit of ancient Roman amphitheatres. It is located in the Orpheus Dol Park and has 1700 seats. Nearby is the town's mineral beach. The city is famous for its many beautiful parks. There are rare plant species such as magnolia, ginkgo biloba, acer, paulownia, albicas. For the believers, two Catholic temples were built: St. Peter and Paul and the Holy Family of Nazareth, three Eastern Orthodox churches St. Pantaleimon, St. Dimitar and the Assumption, and a mosque which is active summer time. There are several cycling routes from Hisarya Hisarya - Voden kamak hut - beginner level 7 km; Hisarya - "Fenera" hut - mountainous terrain for more experienced cyclists 22 km; Hisarya - village of Matenitsa - village of Starosel. 20 km. 1.1 km away is the Ezddul horse-riding base and 15 km away is the Thracian horse base, not far from the village of Jitnitsa. 22 km from Hisarya and 20 km from the current village of Starosel is the ancient architectural complex "Kozi Gramadi", and 13 km away are the famous Thracian tombs and temples near Starosel. Here is also the rock megalith Momini stones. 9 km away is Cromleks in Cholakovata mogila near the village of Staro Zhelezare or the so-called Thracian Observatory. Flying with its ancient history, cool with its greenery and curative with its mineral springs, Hisarya is the place where you will feel at home, watching the water sprays encircle the outline of the statue emblematic of this ancient place once called the "royal town."